On the 26th of January, 2018, I updated my Facebook status with the following:

We had gone through a horrendous week of health scares after Fin feeling unsteady on his feet and having repeated episodes of dizzy spells.

An abnormal heart rate and blood pressure reading causing panic stations, turned out to be an error by the GP using an adult cuff instead of a child’s, and after an emergency ECG and blood tests for everything under the sun, we were finally given the all clear.

And when I shared this picture on social media with our good news, I felt on top of the world. After imagining all sorts of problems and googling all sorts of health scares in the aforementioned week, it was the most incredible relief to know that our worst fears were unfounded and that every single test Fin had undergone had come back completely normal.

But, despite feeling relieved at this point, over the next couple of weeks, my mental health went downhill.

I don’t know if it was a delayed reaction to that week of stress or whether the worry of ANOTHER possible illness triggered memories of that nightmare period post Type 1 Diagnosis in 2012, but without me realising at first, the same behaviours set in.

I became distanced from people, not obviously, but I would make excuses not to be around them and would avoid being with friends and having conversations, preferring to be on my own.

At home, I would retreat to my bedroom as my head was whirling and the littlest thing would make me want to scream. Taking myself away from the situation and being on my own was my coping mechanism.

I became extremely paranoid and was convinced that everyone was talking about me and that Fin was being excluded from friendship groups because of his diabetes.

If I had a message from a friend inviting me somewhere with a group, instead of being pleased to be asked, I would imagine that all these plans had been made without me and that I had merely been asked as an afterthought.

I didn’t want to let Fin out of my sight and became paranoid about something happening to him. I remember these feelings went on for a long time as during the month of March when all the snow hit, his friends would be calling for him and I would want to scream because I didn’t want him to go.

I knew with all the exertion of sledging it would be a recipe for disaster and so I made myself trudge along and stood there, worrying myself sick as he flew down the slopes whooping with delight.

Put simply, for quite a long period of time, I felt emotionless and every single day I could quite happily have stayed in bed and not faced a single person.

The point to make is that I didn’t. I got up, showered, painted on my face (and my smile), got dressed, sent the kids to school, went to work and pretended to the rest of the world I was fine, when inside, my stomach was churning and my mind was a whirlwind of stress and worry.

And that’s the frightening thing about mental illness. It is so easy to hide and so easy for others to miss. 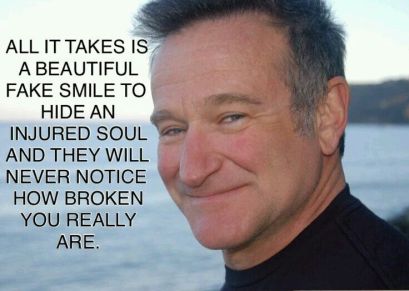 I can talk about that period of time now because it’s over. It lasted a couple of months and one day, I woke up and suddenly realised that my behaviour was becoming more and more similar to how I was in 2012, when I completely lost the plot, and it frightened me so much that somehow, slowly, I managed to pull myself together.

It frightened me as for 6 years, I had been fine and “2012” was labelled as a one-off, the worst time of my life, a ‘reaction’ to the shock of Fin’s diagnosis and something that I would never allow to happen again.

But I nearly did.

And whilst I didn’t sink to the lows I experienced back then, the pattern was the same, the paranoia was the same, somehow I just handled it better.

That black dog may lie dormant for a while but no one ever knows when it will decide to rear it’s ugly head.

If you are struggling, please speak to someone, no matter how hard it may seem.