Today was our long awaited Discovery Cove day. We had visited the park once before in 2005 when Hurricane Wilma hit which meant the park didn’t open until 2pm and the conditions were horrific.

This visit couldn’t have been any more different. The weather was gorgeous and there was a lovely, relaxed atmosphere. We got there about 8:30am and managed to get a dolphin swim at 12:45pm.

Andrew and Cian had also booked onto the SeaVenture experience which was allocated at 10:45am.

As part of the entry fee for Discovery Cove, all food and drink is complimentary throughout the day and so we headed straight for breakfast. It wasn’t great and was served in tiny portions on plastic plates with plastic cutlery which wasn’t that easy to eat with. Whilst you were able to go back for a second portion, the queues were huge and so nobody could be bothered. 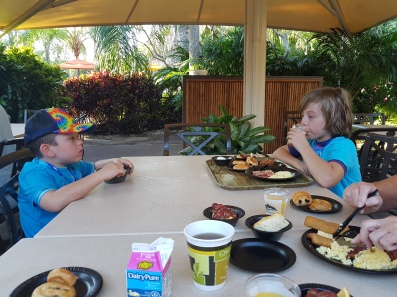 As soon as we finished breakfast, we went to pick up our wetsuits and snorkels and the boys practised snorkelling in the pool. 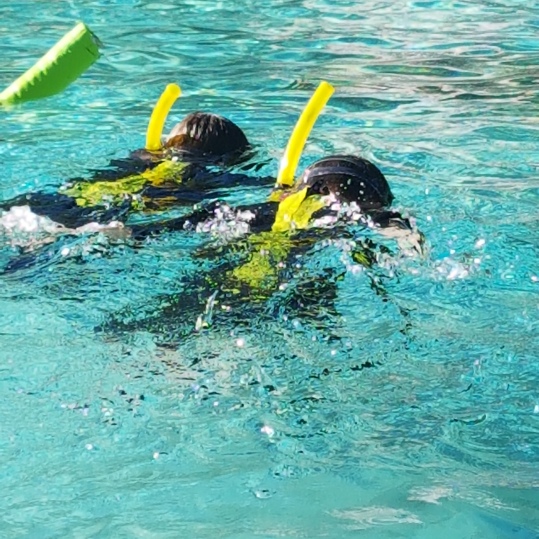 Then it was time to head for the Seaventure experience. We couldn’t see a lot from where we were standing but Andrew and Cian said it was an amazing experience and they managed to get some really good underwater photographs. 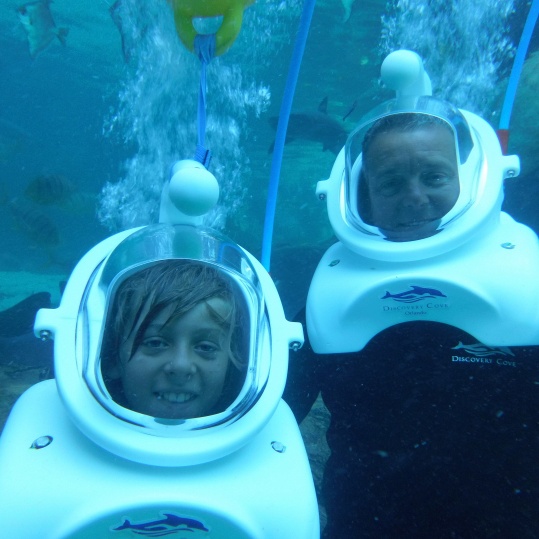 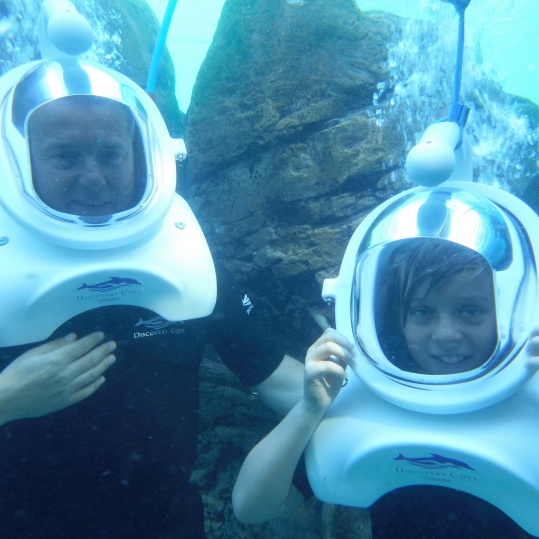 Next, after a bit of sunbathing, we had our dolphin experience with Bimini and Rose. It was such a fantastic experience and every one of us thoroughly enjoyed it. As soon as the swim ended, they took us to a hut to see the professional photographs and of course, they are so lovely that you end up buying the whole package for $243.00!! 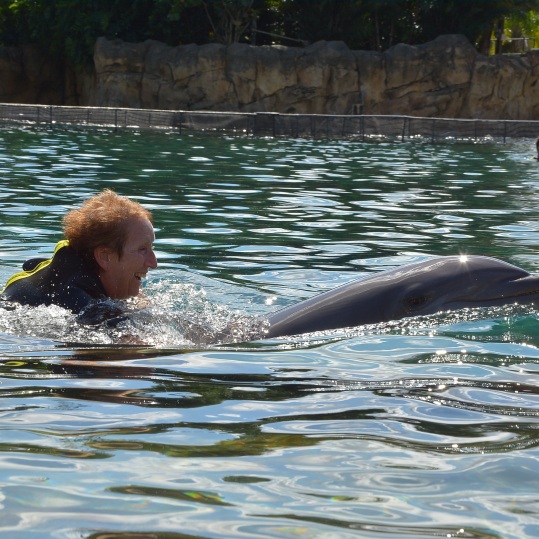 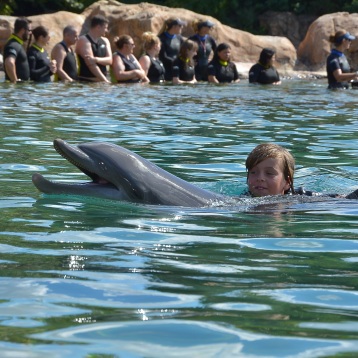 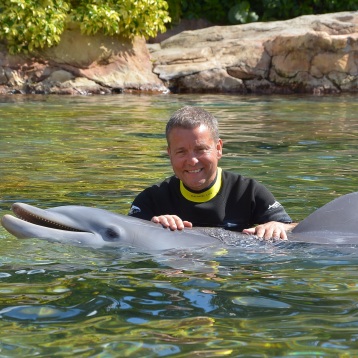 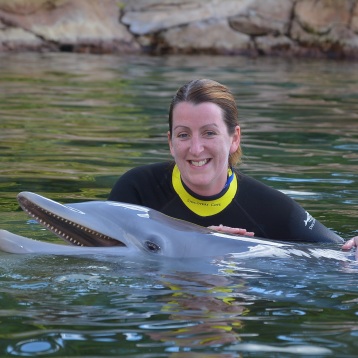 Once we had chosen our photographs, we headed to the restaurant for lunch and it was nothing short of a shambles on the gluten free front. I had emailed before hand and the manager had sent me a spreadsheet with all the allergens detailed and stating that they could provide gluten free hot dog and burger buns.

Firstly, I stood in the line for ages before I got to the front and then when I asked for GF options, I was told I needed to speak to a chef. There was another lady there with her son who were both coeliac and so when the chef came, we both ordered pulled pork rolls for ourselves and bacon cheeseburgers with fries for the boys.

An hour and 20 minutes later after enquiring twice and the actual restaurant closing, we received cold food and the most pathetic excuse for chips that looked like they had been scraped out of the bottom of the fryer. The man who brought them out simply said “Sorry about the wait, the machines are rubbish!”

By the time we had eaten what was edible, we had missed almost 2 hours of the park. I wasn’t going to complain but as I headed to pay for the photographs, the other lady was speaking to the manager and called me over. I explained what had happened and he said he couldn’t understand what the issue was as they deal with these type of food allergies every day. He very kindly gave me 30% off our photograph package as an apology, which I was more than happy with, and said that he would follow up the incident to ensure it didn’t happen to anyone else.

Despite this little blip, we made the most of our last 2 hours in the park, snorkelling in the grand reef and I totally faced my fear of fish and snorkelled all the way around. 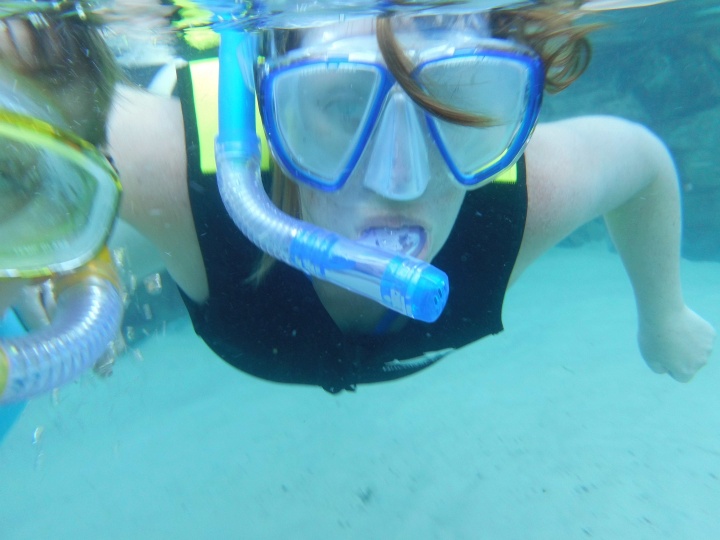 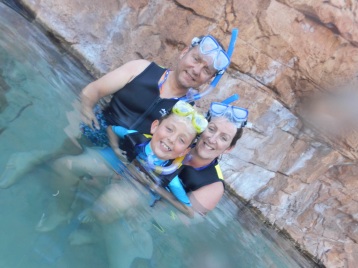 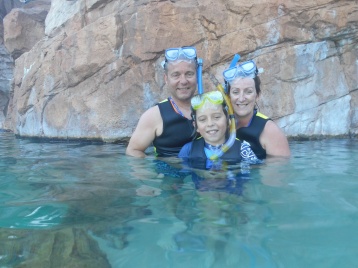 All in all, we had a brilliant day and Andrew and the boys said it was their best day, bar none.

We headed to Outback again for dinner on the way home and this time I went for the ribs with a loaded jacket.

We got back to the villa relatively late and needed to start packing for our mini break as we had booked to stay in the Hard Rock hotel the following night and the Cabana Bay Beach resort the night after.

Lush evening with our diabuddies! . . . Little did we know that when Fin got diagnosed, we would meet get paired with another family who would end up becoming amazing friends. . . . We don't see each other nearly enough (it's been 14 months since the last time) but every time it's like we've never been away! ♥️♥️

Lush evening with our diabuddies! . . . Little did we know that when Fin got diagnosed, we would meet get paired with another family who would end up becoming amazing friends. . . . We don't see each other nearly enough (it's been 14 months since the last time) but every time it's like we've never been away! ♥️♥️