We recently signed up for a month’s trial of the Dexcom G6 due to the fact that we were looking into upgrading from the Dexcom G5.

We have been using the G5 for 18 months, with no real issues. 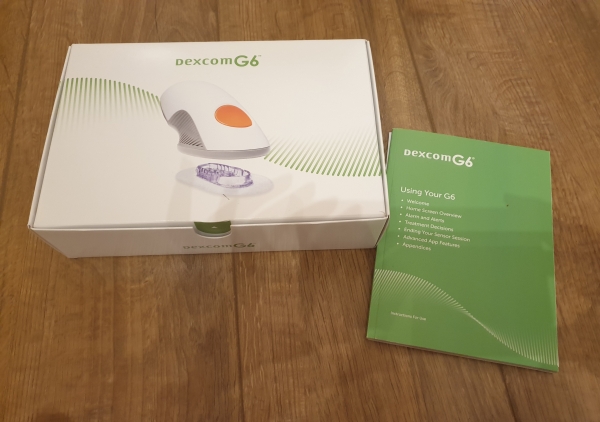 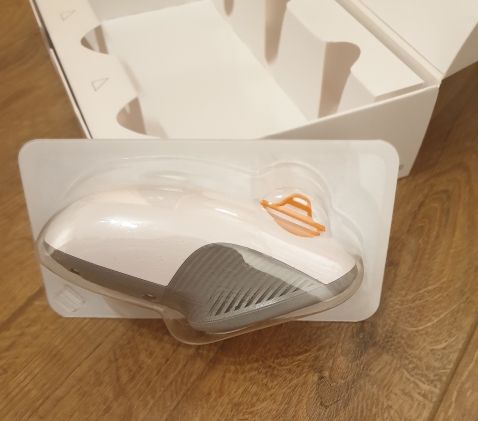 The main attraction for us was the advertised “no finger sticks” and the slimmer transmitter.

We had enough G5 sensors to last until the 3rd week of August, and so it was perfect timing that our last one actually fell off on day 4 of our holiday, meaning we were all set to get up and running when we got home.

This is a MASSIVE improvement. As those of you using the G5 will know, the insertor looks like some medieval torture device and there was a certain knack to getting it right, pulling up and pushing down at the right time.

The G6 is an absolute breeze to insert. You simply peel the adhesive, place the insertor on the chosen part of the body, snap off the safety catch (I suggest doing this after placement, in case you press the release button by mistake in the process) and then it’s just the easiest “one click” on the orange button to release.

You can see how easy it is by watching Fin, aged 9, inserting it into his own leg which he claims was “painless!” Click here for the video. 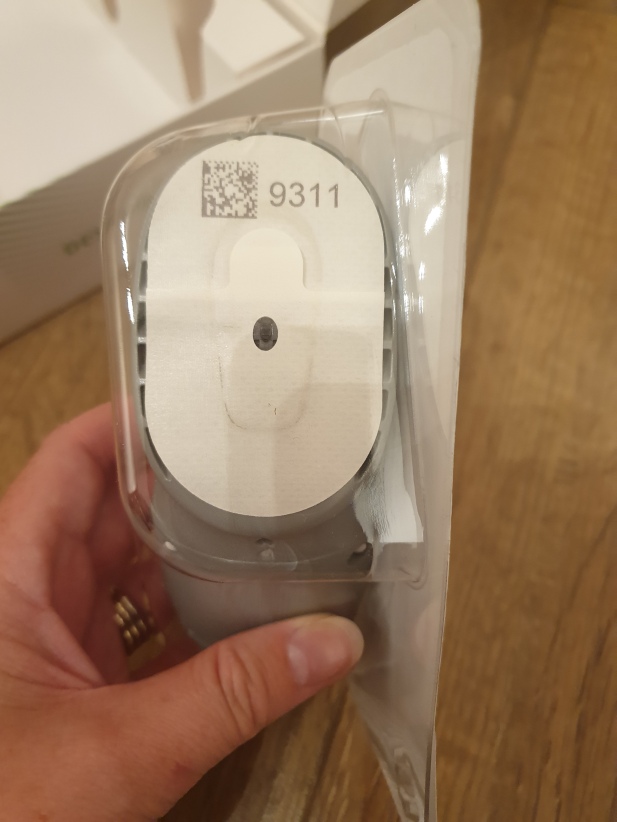 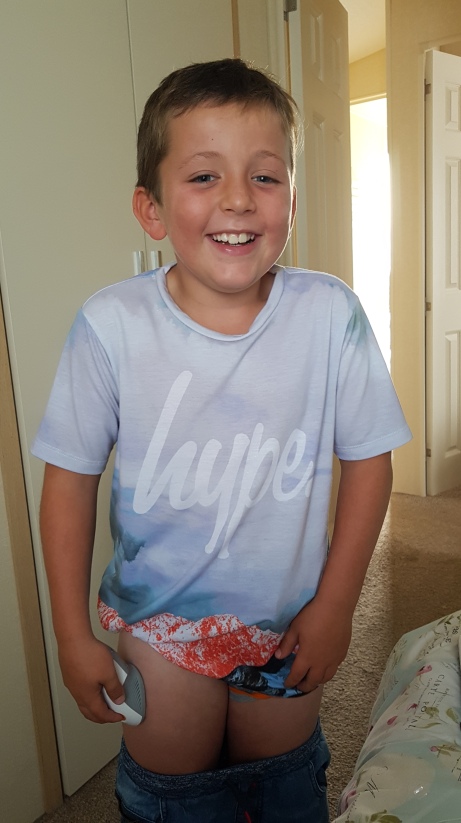 Fin is allergic to EVERYTHING. We have tried Rock tape, Kinesiology tape, Griffgrips, Simpatches, Tegaderm, Opsite, you name it, we’ve tried it. The only tape that he can tolerate is a tape called Hypafix which is made of similar materials to the cannula and Dexcom backing.

With the G5, we normally got 14 days out of one sensor. However, this involved a lot of tape over the top of the sensor (changed daily) and by day 14, it was hanging on for dear life.

Our first impressions of the G6 is that the adhesion is much better! We used no tape at all for the first four days and I then added a piece of hypafix over the top due to Fin playing rugby on day 5. I didn’t need to replace this at all for the next 5 days despite daily showers, a trip to a water based inflatable park and numerous games of rugby / football. In fact, on day 10, I had to use adhesive remover to prise it off.

This was a major plus for us due to the limited tapes that Fin can tolerate. 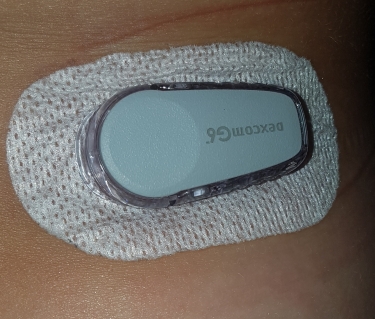 The alarms are pretty much the same other than you have the option to set different alarms for different periods of the day.

We haven’t yet trialled these but I’m sure they will come in useful when Fin starts back to school next week.

I have a new phone (Galaxy Note 9) which isn’t on the compatibility list for Dexcom Follow but it works fine.

In the 10 days we used the first sensor, we only had this alarm once.

In the example below, Fin’s “low alert” was set as 4.5mmol and so the Urgent Low Alert went off when the line dipped just below. We immediately gave fast acting sugar and as you can see, he steadily increased and we avoided a hypo! 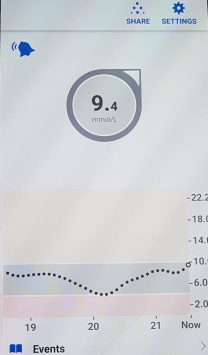 This is a game changer but only seems to work when bloods are dropping really fast. If there is a slow decline, the alert doesn’t seem to pick up the drop.

This is a no brainer for us. We were on the £160.00 per month subscription for the G5 which was 4 transmitters and 28 sensors per year. This meant we had to make each one last for 14 days.

In a 9 year old boy who bathes daily and is constantly playing sport of some description, this is no mean feat and we often struggled to maintain the sensors for 2 weeks.

As the G5 was only licensed for 7 days, we weren’t entitled to replacements if they fell off between days 7 and 14.

To have this new, improved sensor with full coverage for £159.00 a month is amazing!

Now, I am safe in the knowledge that if a sensor doesn’t last the full 10 days, we will be entitled to a replacement and as the sensor is only attached for 10 days instead of 14, this also reduces skin irritation.

This was one of the only disappointments for me. I feel the new app is a backward step. It doesn’t offer anything in addition to the G5 app and the colours are far less vibrant resulting in the app looking rather bland.

Also, when turning the phone on it’s side, the display is really hard to read in landscape mode. I didn’t have this problem with the G5.

I’ll be honest, sometimes the accuracy was amazing and sometimes it was significantly out.

After the two hour warm up, with no calibrations, our readings were impressively close. 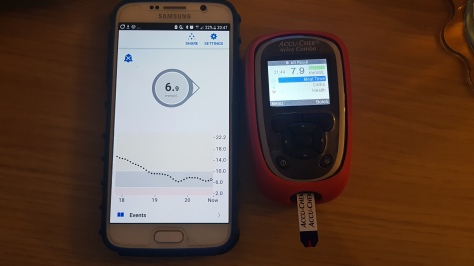 Up until day 4, we were impressed with the accuracy. 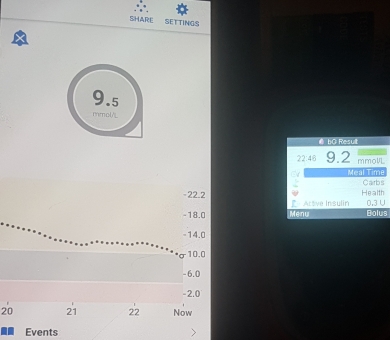 Then, on day 5, we had a period of Signal Loss followed by the G6 stating Fin was LOW (below 2.2 mmol) 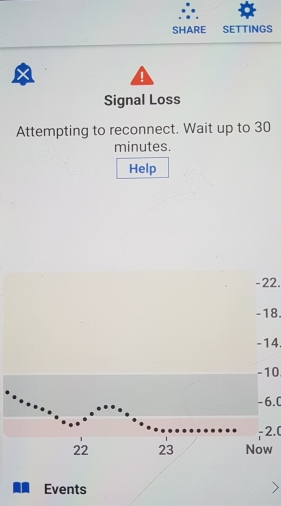 However, when I tested him, he was actually 6.9 mmol.

This resulted in me entering a calibration and I was then prompted to enter another 2 readings, both a further 15 minutes apart.

This seemed to rectify the issue. 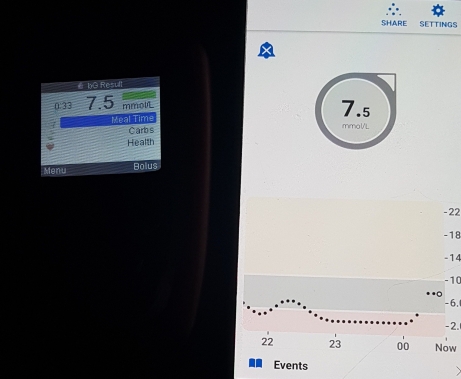 However, a couple of days later, when Fin’s bloods were showing: 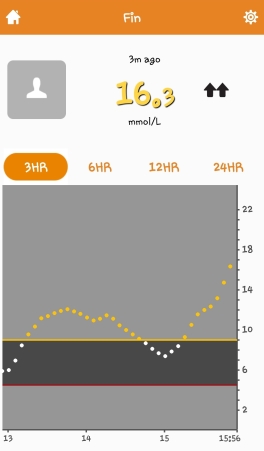 This was disappointing not only because the actual reading was out but also because the trend arrow was also incorrect on this occasion.

Normally, if Fin is reading a number with double arrows pointing up, the fact that the Dexcom is 10 minutes behind would mean that I would expect him to be 18.0 mmol or over on the blood test.

The fact that he was only 12.3 mmol would indicate that his levels were dropping not increasing quickly.

A 4.0 mmol difference would have a significant impact on the level of insulin I would give to correct and so on this occasion, I was really disappointed in the lack of trend and reading.

His actual bloods in this case were 12.3 meaning if I had dosed off the Dexcom, I would have taken him down 10.0 mmol to 2.3 mmol (quite a severe hypo).

To have FDA approval for “no fingersticks”, I expect far closer readings.

This was another improvement on the G5 as far as I was concerned. Normally, when Fin is playing rugby, I totally lose any readings.

With the G6, I trialled putting the receiver phone in his boot bag on the touchline and despite the fact that he was quite far away at times, I had consistent readings for the full hour’s training session through the Follow app. 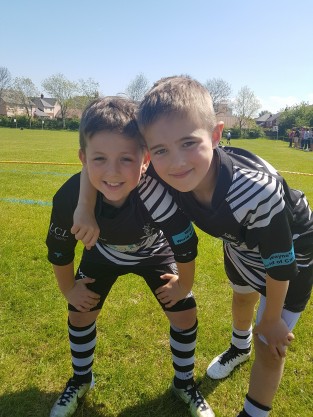 This is a massive bonus for us as having his readings available all throughout the sessions means we can intervene to prevent low sugars before they happen.

Apart from the little blip for an hour where the sensor was incorrectly reading low, we had NO signal loss at all within the whole 10 days. We use the Samsung Galaxy S6 as a receiver.
Summary

The Jury is still out on the accuracy. Some days I was seriously impressed with how close the readings were then within 24 hours, they were miles apart!

Other than appearance of the G6 App, all other aspects of the new system are massive improvements as far as we are concerned.

The transmitter is far flatter and smoother, meaning the risk of getting caught in clothing is minimised.

The alarms are customisable and the adhesive is stronger, but less irritating and finally, the Bluetooth range appears to be much further.

We will definitely be signing up for the 12 months subscription plan.

If you have any questions regarding the G6, please do not hesitate to contact me.

*All words and opinions are my own*

1 thought on “Our first impressions of the Dexcom G6!”